Three Cubans survive on coconuts for 33 days on uninhabited island 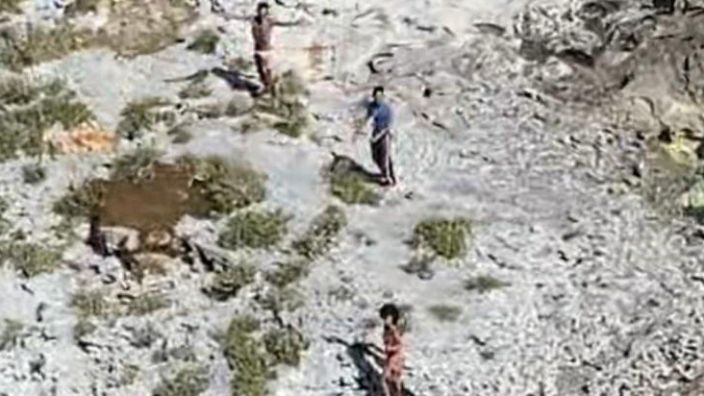 Three people believed to have been stranded on an uninhabited island in the Bahamas for 33 days have been rescued, the US Coast Guard says.

An aircrew was on a routine patrol when it spotted the group frantically waving a makeshift flag on Anguilla Cay.

The Cuban nationals told officials they had survived largely on coconuts.

One of the crew members involved in the rescue efforts told the BBC he was “amazed that they were able to survive for so long”.

The group was first spotted on the island located between the Florida Keys and Cuba on Monday.

Coast Guard official Riley Beecher told the BBC that he was out on patrol when “something caught the attention of my eye”. When he came back round at a lower altitude, he realised that there were people on the island in distress.

The crew was not equipped to carry out an immediate rescue, but food, water and a radio were dropped to them so they could communicate.

“Unfortunately we didn’t have any fluent Spanish speakers but in my broken Spanish I was able to discern that they were from Cuba and that they needed medical assistance. They made sure to stress that they had been on the island for 33 days,” Lt Beecher said.

The group of two men and one woman told Coast Guard officials that they swam to the island after their boat sank.

Justin Dougherty said the group later told him they were “able to get nourishment from coconuts”.

“At first glance the island doesn’t seem to have much, but there is some shrubbery there and some trees so they were able to stay out of the elements somewhat,” he said.

US media reports say they also survived on rats and conchs.

The trio was finally airlifted from the island by helicopter on Tuesday and taken to a medical centre in Florida, though they have no reported major injuries.

They have since been transferred to US Immigration and Customs Enforcement, the Coast Guard says.

Members of the rescue team told the BBC they had never witnessed a situation like it before.

“I’ve never come across anyone who’s been [stranded] for anywhere like that length of time before,” Lt Dougherty said.

Three Cubans survive on coconuts for 33 days on uninhabited island

Look Out Cotton, These 3 Fruits Are Shaking Up the Textile Industry